Early on in my photo career, (back in the 1900’s), while attending my first photo workshop, “Introduction to the View Camera” at the Maine Photo Workshops, I had a powerful life lesson, that has remained with me till this day.  We were making long exposures at Fort Knox, an impressive example of late 1800's military architecture, located along the narrows of Penobscot Bay.  It's granite construction, with long passageways, and repeating arches, is illuminated by only the embrasures and loopholes for the cannons and small arms.  My 4” x 5” large format film camera was set up, the black cloth was over my head, the dark slide was out and I am poised with cable release in hand. I am ready to make a several minute exposure, when another visitor walks into my scene.  I asked them to wait until I was done. They did, but they also complained to my instructor, who made it very clear that I was never to do such a thing again. It was a public space, and they had as much right to be there as I did.

So where are we going with this story? Fast forward to Spring 2021, a large, diverse group of wading birds were just hanging out in the pond beside the S. Harbor Drive bridge; the photograph I call the "Breakfast Club", reminds me of that learning moment at Fort Knox.
I am not a bird photographer. I lack the patience to sit behind a tree blind for hours just waiting for the birds to appear. Typically what happens is, I see a bird, I raise my camera to shoot and I get a photo of a bird flying away.

But this scene was so rare, I just had to give it a shot. So I set up my tripod and my Hasselblad medium format camera. So far so good, it is quiet, the birds are unfazed by my presence behind the cover of a green buttonwood branch.

The birds proximity to the bridge and human activities could not be observed unless you were on the cart path. But with my tripod set up, it now appears that something is going on, so passersby would stop and look, maybe snap a photo. Not much I can do but carry on, and try to focus on the birds, who remarkably are still there. But when the one man stops, gets out of his cart and at the top of his voice announces "Hey look... Martha... there's birds here. Come look at the birds!" Then directing his attention to me, "Hey, do you know what the pinks ones are? I never seen a bird like that!"

Afterwards I read that in 2020, scientists captured ten adult spoonbills nesting in Florida Bay and attached cellular tracking devices so they could learn about the nesting and foraging habits of adult roseate spoonbills. They have found that the birds are using more ponds inside bay keys than the mangrove wetlands on the mainland that they historically preferred. The Ocean Reef Conservation Association, in support of Audubon’s spoonbill studies have funded a number of trail cameras to monitor nesting success. The photos taken by the trail cameras are able to capture truly candid images of every movement these birds make. I cannot wait to learn more and hopefully see more birds in the future, as Everglades restoration continues to increase freshwater flows, so vital to the birds survival.

The “Breakfast Club” is currently on display at Island Interiors at Ocean Reef.   It is a sublimation print on white gloss, exterior grade aluminum, with a german silver cube frame.   This selectively toned sepia print measures 42” x 22”.   It features wading birds including Wood Stork, White Ibis, Roseate Spoonbill, and Little Blue Heron, as well as the Great White Heron and Snowy Egret. 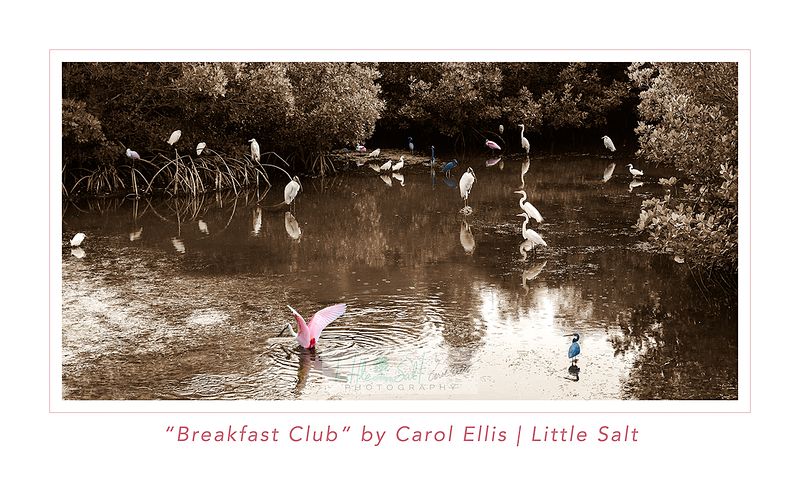 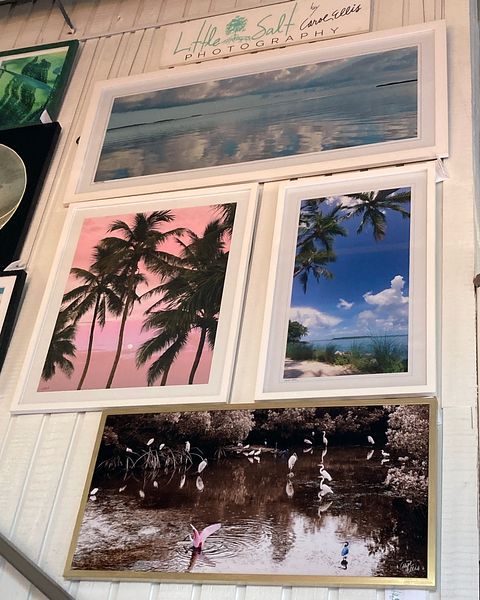 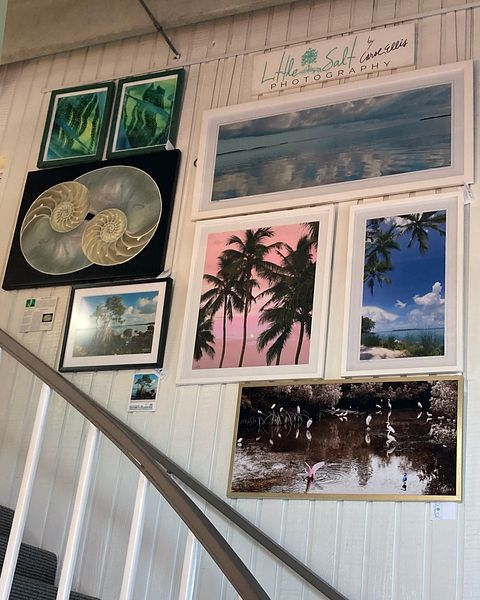