This photograph entitled “Overlapping Worlds” was taken on a calm summer morning in July in the Florida Keys. It is a panorama view, looking northward from Ocean Reef. This panoramic photo depicts the tranquil waters of Card Sound, as a boater would traverse the Intracoastal waterway, and Biscayne Bay, and from our perspective, towards the ghost-like mirage of a distant Miami skyline. Framing the view are the tree and mangrove covered islands of North Key Largo.  Our gaze goes skyward to take in the pink and purple clouds, and then down to Monet-like water reflections.  “Overlapping Worlds”, a framed pigment print on metallic photo paper, is currently on display at Island Interiors at Ocean Reef, along with my other new works.

As I look at this photograph, I am reminded of a similar feeling as I set out to sea, for my first ocean voyage forty years ago.  I recall the feeling as one of nervous excitement; as land was slipping further away, there would be no turning back. This was no three hour cruise... (to quote a familiar line from Gilligan's Island)… "if not for the courage of the fearless crew, the "Minnow" would be lost.

After a few days the crew would be into a routine, 4 hours on watch and 8 hours off, unless the occasional squall presented, and it was all hands on deck. Twenty-four hours a day, we lived by the wind, the waves, the sun and sea spray, navigation charts and log entries, tea and biscuits at three, until finally land was again in our sights. At that point, the feelings aboard were a mixture of excitement for a new adventure and sadness the voyage was nearing an end.

After my nearly five years at sea, when I returned to civilization; it was a hard reality. While living near downtown Miami, I'd get my hub-caps stolen at night; a wrong exit off I-95 put me in a bad neighborhood where the police stopped me when they thought I was looking for drugs. Less than a month later, I arrived in the Florida Keys and stayed. Though my friends asked why I'd move to such a place, full of just fishermen, I'd respond, "what's wrong with fishermen?"

Though our worlds overlap, I prefer this side of the pond.

The smell in the air is a mixture of pine needles and eucalyptus mulch, as the gardeners are sprucing up our tropical paradise. Much appreciated after the summer "keys cologne", that tantalizing mosquito repellent fragrance which is a combination of "Backwoods Off" and mosquito coils.

As fall approaches, we are still in short sleeves in the Florida Keys, but the wind is picking up, from a direction more to the North.  The humidity is a touch lower, and it’s nice to put on a long sleeved fishing shirt.  Which brings to mind my latest artistic creation, the “Downtown Card Sound” DRI-FIT fishing shirt which has SPF 50 sun protection.  I photographed the Cuban migrant fishing vessel, which was propped in front of Alabama Jacks in 1988 using my film camera.  I recall when I first arrived in the Keys, my friend Maureen and I stopped at “Fred’s Place”, where we rented a dinghy for a few hours to tour the nearby mangrove islands.  We made it as far as the middle of Card Sound Bridge when the motor conked out.  Not too much later, the folks who rented us the boat, came for our rescue.  I don’t recall if we got a refund, but it made for a good adventure. 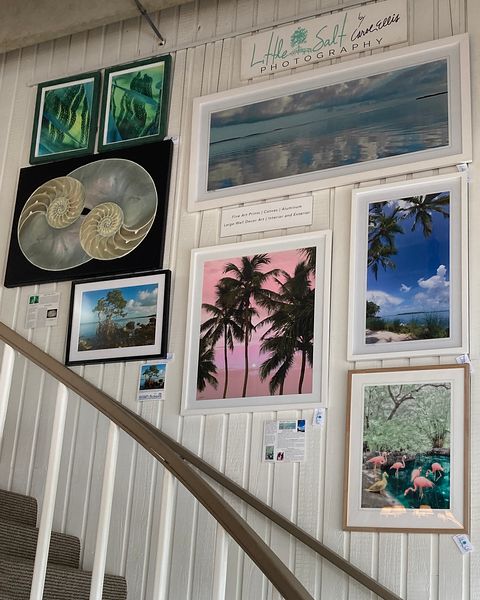 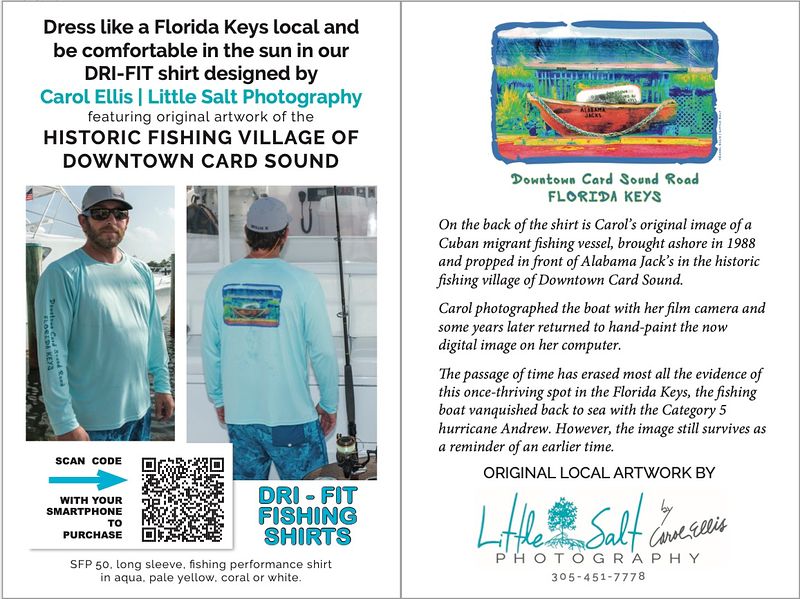